The club continued to grow and in 2014 was rowing regularly, taking part in local regattas and applied for an 'Awards For All' lottery grant to provide funding to build a second skiff. This was successful and Steedie Falconer was launched in May 3, 2015. Steedie was named after a local fishwife who died during the time the skiff was being built. The boat was registered as SCRA No 95, the same age as Steedie when she passed away.
​
Following the launch, the club became a Scottish Incorporated Charitable Organisation (SCIO) on April 22, 2016. Members began doing training in First Aid and Seamanship and continue to learn about rowing and the sea. Other members are now trained as SCRA Umpires, and are licensed to use VHF radios. 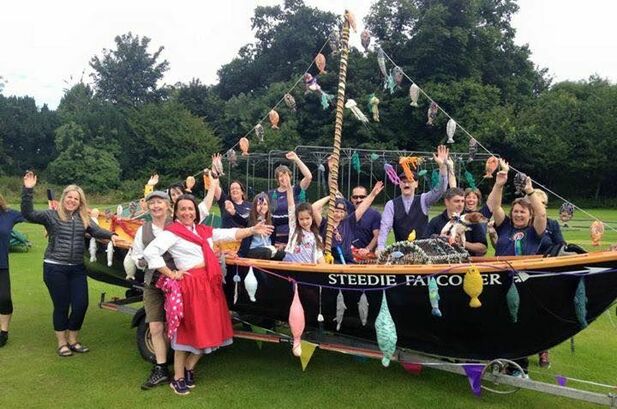 e club has always had a strong community spirit and has taken part in the town’s annual festival and communities days. We held the first-ever Rowing of the Marches event in 2016 for the town’s Riding of the Marches, an ancient festival held every 21 years to mark the town’s boundaries. Our event marked the sea boundary of Musselburgh. We have also taken out many young people’s groups including Scouts, Duke of Edinburgh and Barnados. We also do several taster sessions every year for anyone who would like to try rowing.

​We have regular fundraising events open to non-members and are hoping to build our own boatshed in the future. We continue to take part in regattas throughout Scotland and the north of England and have begun having longer rows, including one from Fisherrow to North Berwick in 2017, and one from Kinghorn to Inchcolm Island and back in 2018.
We have also hugely appreciated and enjoyed having the chance to take part in national events including a flotilla celebrating the opening of the Queensferry Crossing bridge in 2017, and the opening of the V&A museum in Dundee in 2018.
As 2019 gets underway we can proudly say that in its sixth year the club is going from strength to strength. For the first time we will participate in the Skiffie Worlds which take place on Loch Ryan at Stranraer in July. We will be racing alongside clubs from all over the UK, from Europe, Canada, the US, Australia and New Zealand. Go Eskie!!!